Athletics at an Inflection Point: Adapting to the New Financial Model of Athletic Departments

Athletic department budgets have been a focus and source of controversy in higher education for decades, as most programs consume institutional resources while contributing mostly intangible benefits. Financial pressures across higher education are forcing institutional leaders to take actions that had previously been considered untenable. Digging deeper into the revenue makeup and expense drivers of both autonomous and midmajor athletic departments highlights how difficult stabilizing bottom lines will be in the coming years and adds insight into actions over the past year by institutions.

The economics of college athletics has been an area of growing significance — and concern — at many institutions, where the business model and mission are often distinct from other university operations. One year after March Madness was cancelled, institutional leaders at over 89 colleges and universities have cut over 290 athletic programs in response to the financial pressures of the pandemic. And while the flurry of activity may have subsided for the time being, leaders remain at a crossroads and need to fully understand the economics of college athletics and how the pandemic may reshape them to move forward.

Revenue and Expenses by the Numbers

Under many resource allocation models, athletic departments are treated as auxiliary units within the university. As such, they are expected to break even financially and rely on a variety of revenue sources, many of which are under threat, as shown in figure 1. The extent to which these funding sources are at risk depends largely on conference affiliation.

Across the NCAA’s most competitive subdivision, the Football Bowl Subdivision (FBS), a clear bifurcation of programs exists in terms of revenue generation. Power Five institutions, the higher tier of the FBS, rely heavily on football (and men’s basketball to a lesser extent) to subsidize the rest of their operations, while Group of Five schools, the lower tier of the FBS, depend primarily on institutional funds and student fees. Even with optimism that normal seasons resume in the fall of 2021, the financial repercussions for institutions unable to endure the pandemic-induced financial loss may permanently fracture athletic departments. 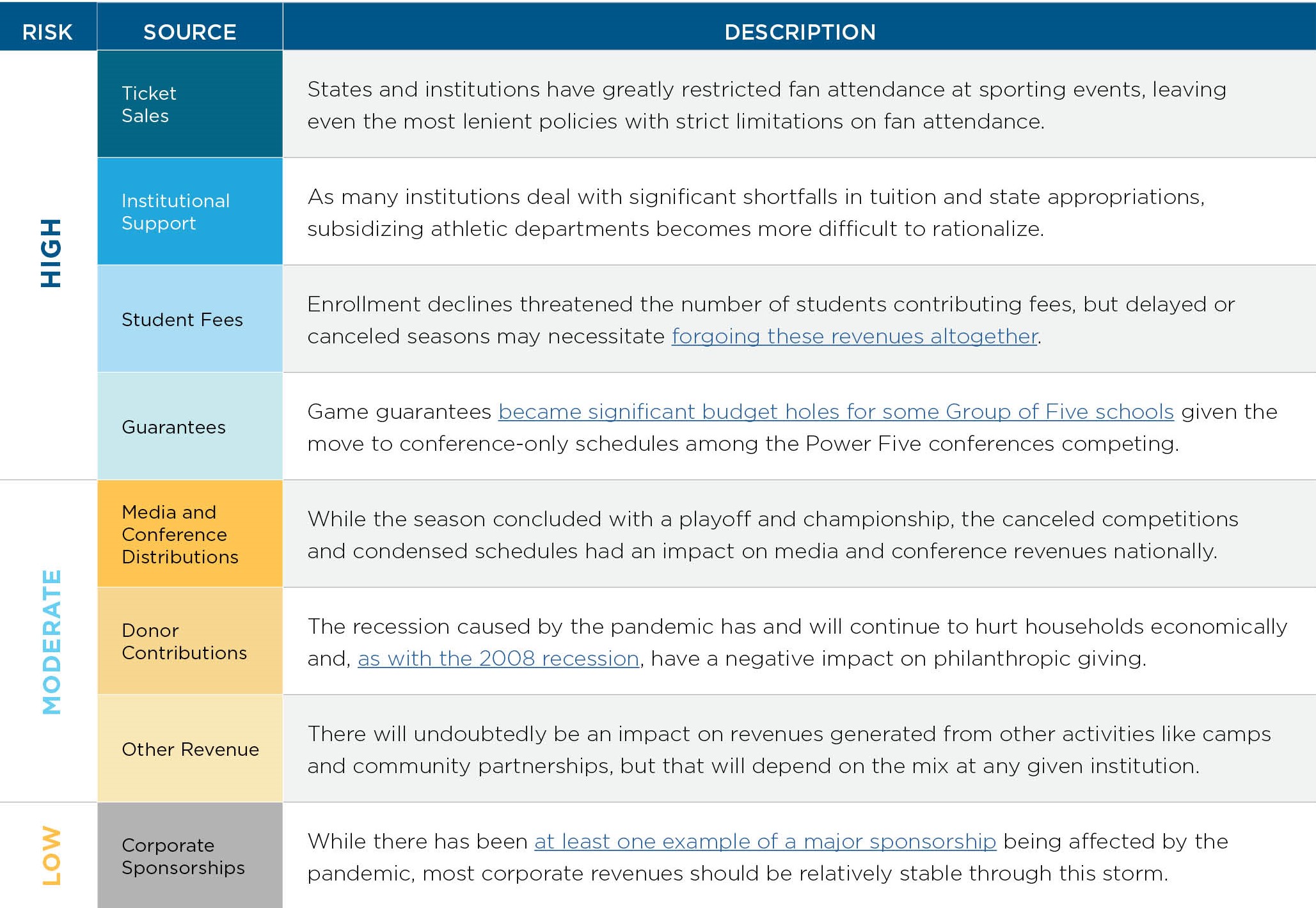 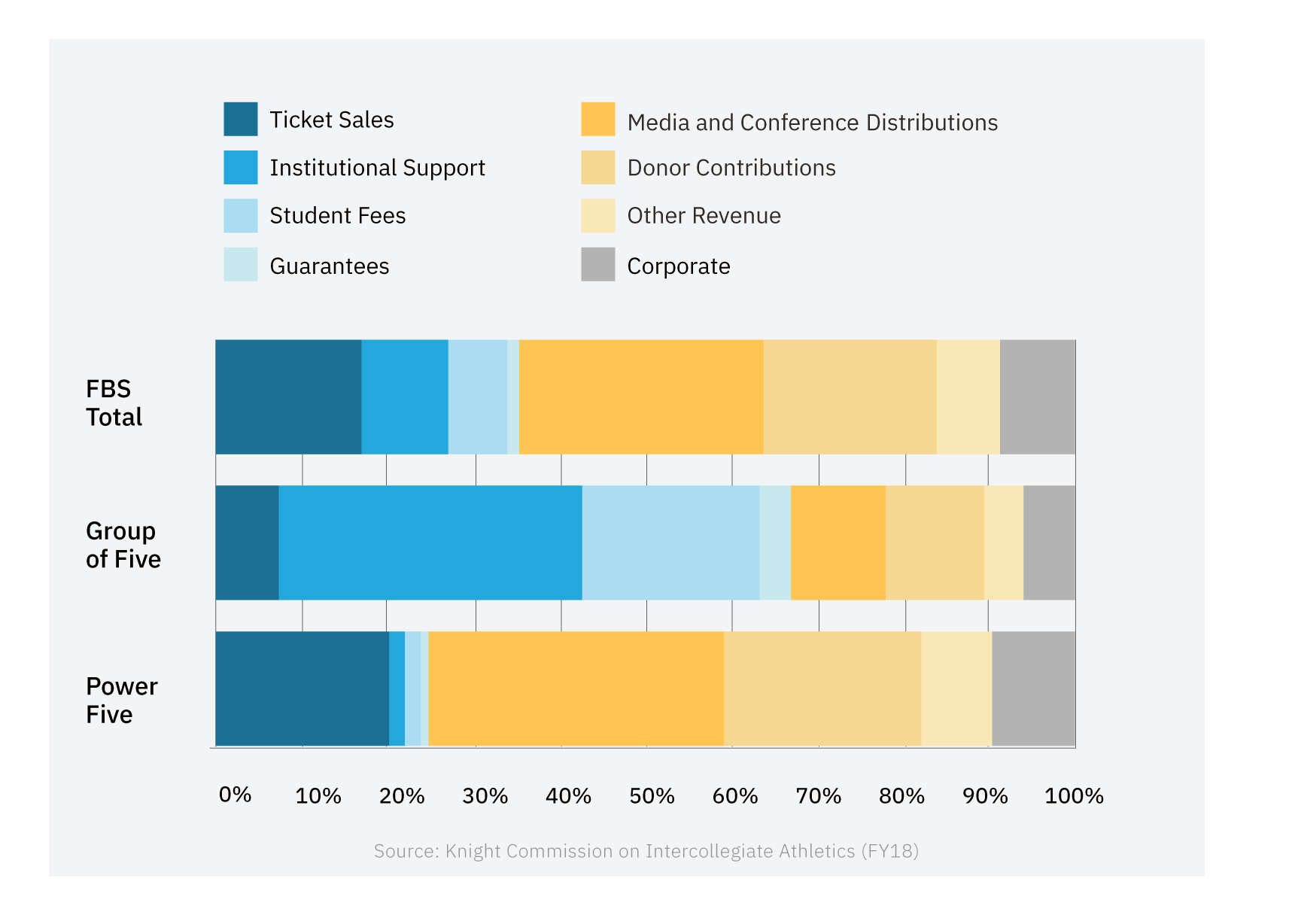 Despite revenue growth in recent years, athletic departments have struggled to accumulate financial reserves due to steadily increasing expenses, as shown in figure 3. Most rely on institutional assistance to some extent to balance their budget, while the more affluent programs have invested their resources into expanding their enterprises (i.e., the number of teams and the facilities that support them) in what has frequently been described as an “arms race.” 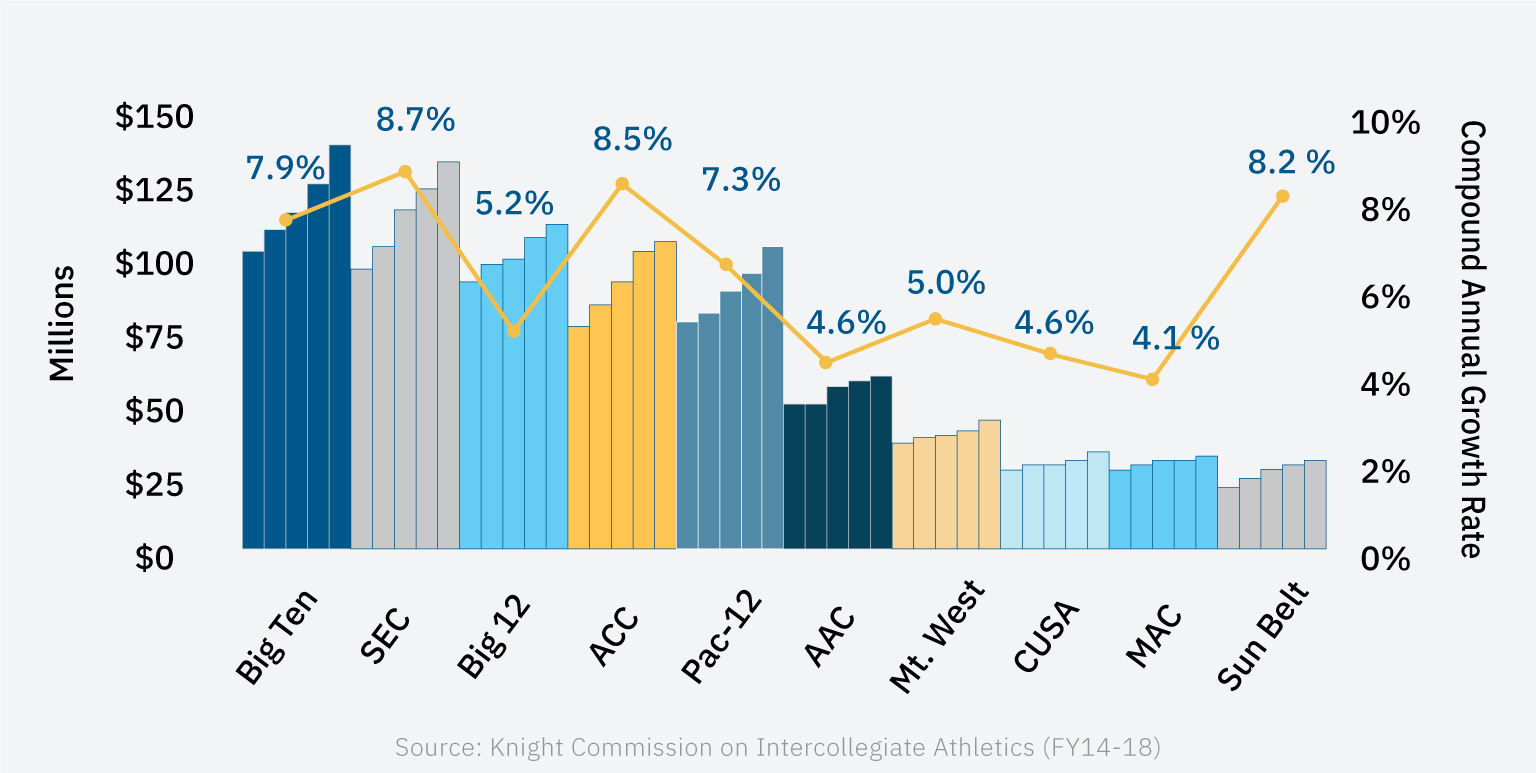 According to The Wall Street Journal, only 41% of Power Five and 26% of Group of Five athletic departments have been able to build financial reserves, so for many institutions that do not have rainy day funds, deficits will need to be addressed through incremental revenue generation, expenditure reductions, increased institutional subsidies or, in some cases, the issuance of debt.

For institutional leaders looking to evaluate financial sustainability, it is critical to determine the extent to which expenditures are avoidable. Despite the vast differences in scale, proportional budgets across programs within the Power Five and Group of Five are similar, as shown in figure 4. Compensation of coaches and administrators make up nearly 40% of institutions’ budgets, which explains the decision of many institutions to implement furloughs and pursue pay cuts for coaches or other top earners. 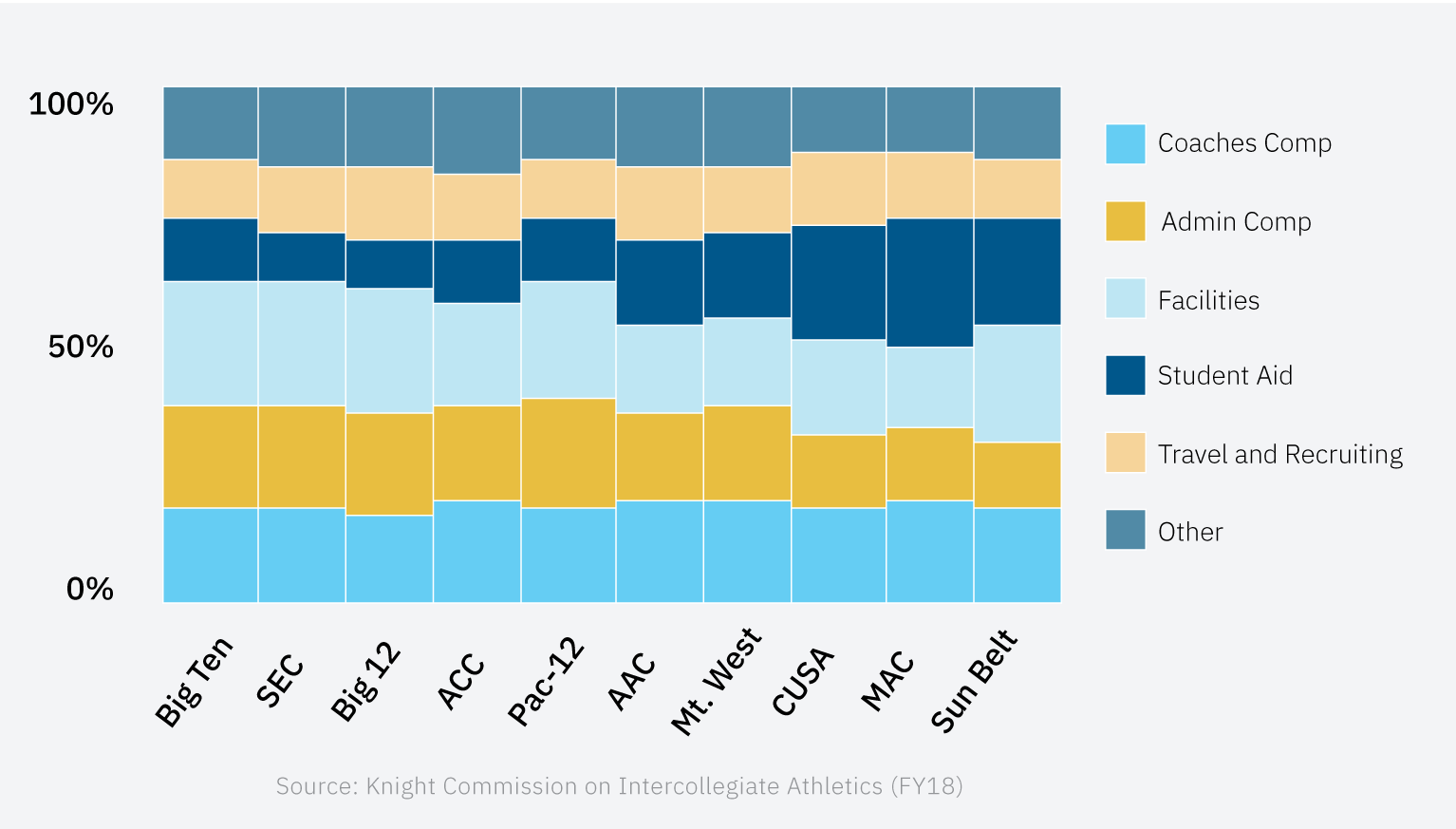 Looking across other expenditure types, it becomes clearer why so many institutions have resorted to cutting programs. Only travel and recruiting, which make up 11% of expenditures on average, was manageably avoided under the pandemic’s circumstances. So, short of heroic fundraising, one of the few and immediate ways to permanently create savings within compensation, facilities and student aid expenses — nearly three-quarters of all expenses — is through program reductions.

Athletic department finances involve complex interactions between the private sector, university donors and university funds, often obscuring the financial picture for both the athletic department and the institution as a whole. For some institutions, the athletic department is a genuine source of revenue diversification, while others rely on student fees and institutional subsidies to balance department budgets. Expenses are equally convoluted, with the complexities of accurately costing financial aid or overhead expenses making a simple profit and loss calculation difficult. Furthermore, the intangible benefits athletic departments contribute with regard to market exposure, student experience, fundraising and alumni engagement are difficult to quantify through a traditional bottom-line analysis.

What is clear is that revenue losses sustained from the COVID-19 pandemic have brought the field of intercollegiate athletics to an inflection point, and no department will go unaffected. Given the noted complexities, institutions should carefully consider the impact reductions may have on the financial health of the entire institution, beyond just the athletic department. Huron is working with leaders to think about the future of the industry and solve for the intersection of athletics and academics. It recently gathered leaders together, like Jim Delany, former commissioner of the Big Ten Conference, for a webinar hosted by The Chronicle of Higher Education, to discuss how to advance a successful athletic enterprise within an institution.

The pandemic has forced institutional leaders to take a harder look at their athletic programs’ bottom lines. Given the intricacies of making decisions about whether (and where) to cut, it is important to:

Consider how reductions may impact the financial health of the entire institution, beyond just the athletic department, and whether there is a change management plan in place.

Assess the direct and indirect revenue contributions from athletics, and on the expenditure side, determine the extent to which certain expenditures are avoidable.

Base budget-reduction decisions on a comprehensive view of the financial impacts and intangible benefits of sports (including culture and “brand identity”).

Athletics at an Inflection Point: Adapting to the New Financial Model of Athletic Departments